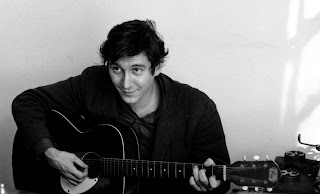 Philip David Ochs was born December 19, 1940, in El Paso, Texas. Ochs was a “topical” singer, guitarist and songwriter, who first garnered attention in New York’s Greenwich Village. Fellow folk singer Dave Van Ronk commented that “as a lyricist, there was nobody like Phil before and there has not been anybody since…he had a touch that was so distinctive that it just could not be anybody else. He had been a journalism student before he became a singer, and he would never sacrifice what he felt to be the truth for a good line.” Folk singer and activist Pete Seeger wrote Phil a note in 1963 that said “I wish I had one tenth your talent as a songwriter.” An early opponent of the Vietnam War, Ochs took part in numerous anti-war protests and demonstrations. In 1964, Bob Dylan commented in Broadside magazine that “I just can’t keep up with Phil. And he’s getting better and better and better.” Ochs eventually recorded a total of eight albums for Elektra and A&M Records. He personally viewed his performance on August 28, 1968 at Grant Park, Chicago, Illinois as the highlight of his career, taking place during protest demonstrations while the Democratic Party held their National Convention. As one of the leaders of the Youth International Party, Ochs later testified at the Chicago Seven trial. After the Vietnam War ended in 1975, he played at One Last Rally in New York City, performing a duet with Joan Baez. Less than a year later, Ochs committed suicide on April 9, 1976. Critic L.A. Smith summed up Phil Ochs’ career as follows: “Among folk legends, the late Phil Ochs is nearly peerless. His dozen years as a ringing voice in the war against social and political injustice left the world with a wealth of music and lyrics that remain powerful and in some cases topical more than 30 years after he recorded them. Joined by the likes of Ry Cooder, Clydie King, Jack Elliott, Van Dyke Parks, Don Rich, and Tom Scott, Ochs created a legacy of words and music that continues to drive the spirit of social conscience in musicians like Billy Bragg, Natalie Merchant, and Ani DiFranco.”

(1940-1961) – Ochs receives his political education from Jim Glover, who introduces him to the music of Woody Guthrie, Pete Seeger, and The Weavers. Ochs reads Jefferson, Adams, Paine, Marx, Engels, Mao Tse-tung, Lincoln, as well as the history of Cuba and the Spanish-American War. He writes for The Lantern, the Ohio State student newspaper, starts his own paper called The Word, and has letters published in the Cleveland Plain Dealer. He and Glover form a singing duo, the Sundowners. As soon as he is passed over for the position of editor at The Lantern for being “too controversial” in his political views, he leaves for New York.

(1962-1963) – FBI notice of Ochs begins early in January 1962 at a meeting of the Women’s International League for Peace. He plays shows in Greenwich Village, and meets contemporaries Bob Dylan, Dave Van Ronk, and Bob Gibson. He soon becomes a contributing editor of Broadside magazine, a topical song magazine, in which he publishes both his songs and political writings. He convinces the editors of the magazine to begin releasing a Broadside Ballads series of LPs on Folkways Records. He gains exposure through the Newport Folk Festival, earning a mention in the New York Times: “his satire is trenchant and his opinions are controversial…” Ochs performs at church rallies to raise money for the miners’ movement in Hazard, Kentucky and later spends his Christmas there with other New York students and organizers at the end of 1963. Songs of this period include “Too Many Martyrs” (for civil rights activist Medgar Evers), “Ballad of Oxford” (on desegregation in Mississippi), and “Vietnam,” likely the first protest song ever penned against the war.

(1964) – After playing his second Newport Folk Festival, Ochs heads south with the Mississippi Caravan of Music to encourage voter registration among African Americans. When the bodies of three civil rights workers are discovered in the swamps, Ochs interviews Mississippians on the street for their reactions. The result from these discussions is the caustic “Here's to the State of Mississippi,” later nominated for song of the year by the Canadian Federation of English Teachers. Ochs releases All The News That’s Fit To Sing, featuring the patriotic “Power and the Glory,” the Woody Guthrie tribute “Bound for Glory,” “Talking Vietnam,” “Talking Cuban Crisis,” and “Bullets of Mexico” (added later to the CD release).

(1965) – Early in the year, I Ain’t Marching Anymore is released, which includes the title track (which “borders between pacifism and treason, combining the best qualities of both”), “Draft Dodger Rag” (“free enterprise strikes again”), “Talking Birmingham Jam” (“Birmingham is one of the cities that made the FBI what it is today”), “Links on the Chain” (concerning labor unions as “the new pillars of the segregated structure”), “That Was the President” (“systems, not men, are the enemy”), and “In the Heat of the Summer” (“scenes and images of the riots last summer in Harlem”). In May, Ochs plays college campuses across the country and attends the first Vietnam Day Teach-In at Berkeley, meeting Jerry Rubin. In the summer, Ochs visits the Newport Folk Festival to watch Dylan’s electric set and defends him in the press: “there must be no shackles put on any writer to force him to cover certain subject material or use certain styles.”

(1966) – In January, Ochs plays his first solo concert at Carnegie Hall. Phil Ochs In Concert is released, featuring commentary on migrant workers in “Bracero,” the Berkeley Free Speech movement in “I’m Going to Say It Now,” and the satirical “Love Me, I’m a Liberal.” Also included on the album are “There But for Fortune” (later a hit for Joan Baez), “Santo Domingo” (about the 1965 U.S. invasion), and “Canons of Christianity” (“the first anti-hymn”). The Globe and Mail writes that he “sings the frightening truth, and in such an enjoyable way that there is no alternative but to listen.”

(1967) – As a form of “mental civil disobedience,” Ochs organizes two “War Is Over” rallies in Los Angeles on June 23 and in New York City on November 26. Pleasures of the Harbor is released, with songs including “Outside Of A Small Circle Of Friends” (about societal apathy and the murder of Kitty Genovese), “The Party” (a metaphor for escapism), and “Crucifixion” (concerning the creation and eventual destruction of political heroes).

(1968) – Ochs supports Eugene McCarthy in his run for presidency of the United States, noting that “McCarthy has been consistent in his philosophical attack on militarist America.” Tape from California is released, introducing record buyers to the story of labor organizer “Joe Hill.” In July, Ochs tours Sweden, Norway, Czechoslovakia, Denmark, England, Germany and France, witnessing firsthand student protests and worker support for them. In August, Ochs visits Chicago during the time of the Democratic National Convention and participates in rallies and concerts there with the Youth International Party (or Yippies). The events at Chicago leave Ochs feeling that “something very important died there, which was America.”

(1969) – Rehearsals for Retirement is released. The events of Chicago in 1968 are recalled in “William Butler Yeats Visits Lincoln Park and Escapes Unscathed” and “Where Were You in Chicago.” The FBI interprets a satirical line in “Pretty Smart on My Part” as a threat against the President. In December, Ochs testifies at the Chicago Seven trial, whose defendants were charged with incitement to riot. During testimony, he recites the lyrics to “[track artist=Phil Ochs]I Ain’t Marching Anymore,” garnering him an appearance (through courtroom drawings) on the ABC Evening News.

(1970-1973) – On a brief tour that included Carnegie Hall, Ochs tries to combine the popularity of Elvis Presley with the revolutionary Che Guevara to decidedly mixed results. His final studio album Greatest Hits is released, consisting solely of new songs including “Chords Of Fame” (“about the dangers of fame”), “Ten Cents A Coup,” and the prophetic “No More Songs.” Spending time in Paris in October 1970 with Jerry Rubin, Ochs meets organizers of the 1968 rebellion, as well as the radical Kraubauterzen political party in Amsterdam. In 1971, with Rubin and Stew Albert, Ochs flies to Chile to view the country in the aftermath of the election of Salvador Allende. There he meets his Chilean counterpart, Victor Jara, a popular singer who performs overtly political material. At the end of 1971, Ochs plays at a rally with John Lennon, with both performers’ speeches and lyrics being carefully scrutinized during the show by the FBI. Ochs updates his song about Mississippi into “Here’s to the State of Richard Nixon” and in 1973, he writes a series of articles for the Los Angeles Free Press. On September 11, the Chilean government is overthrown in a military coup; Ochs is devastated by the news of Allende’s death and the death of his friend Victor Jara.

(1974-1976) – Ochs organizes “An Evening with Salvador Allende,” a benefit concert that takes place on May 9, 1974 in the Felt Forum at Madison Square Garden. The show sells out once word of surprise guest Bob Dylan is announced. Gunfight at Carnegie Hall, Ochs’ Elvis/Che concert from 1970, is released in Canada only in 1974. In May 1975, Ochs organizes and performs at a rally in Central Park celebrating the end of the Vietnam War, singing “There But for Fortune” with Joan Baez and “The War Is Over” to a crowd of 50,000. Plagued by manic depression in the last years of his life, Ochs commits suicide at his sister’s home in Far Rockaway, New York on April 9, 1976.

Phil Ochs: There But for Fortune Documentary on DVD